Pre-Crash Interactions Between Pedestrians and Cyclists and Intelligent Vehicles 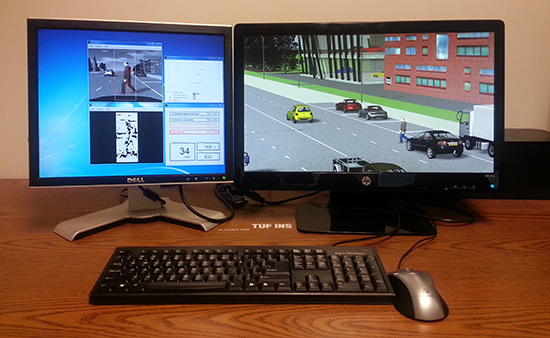 This project investigates how autonomous and semi-autonomous vehicle systems can be configured and improved to accommodate pedestrian and bicycle safety. This project comprises both the modeling track and experimental track components, with a specific focus on pre-crash scenarios involving pedestrians and cyclists.

We propose to develop a simulation model for the vehicle pedestrian/cyclist crash testing scenarios building upon the Pre-Scan model developed at IUPUI. We will validate and modify the simulation models using the UTC’s driving simulator network and vehicle field tests. We will first consider single vehicles, but extend to scenarios involving two or more vehicles engaging pedestrians and cyclists. One of the most dangerous scenarios for pedestrians is the multiple-threat scenario in which a vehicle approaching a crosswalk cannot see a pedestrian crossing the street because that pedestrian is obscured by another vehicle stopped for the pedestrian. It will be important to determine how vehicles with pre-crash warning and crash imminent braking (CIB) capabilities perform in these scenarios. We will also develop pedestrian/cyclist crash scenario simulations in which we can incorporate the bioinjury model to predict the pedestrian/cyclist injury for different crash scenarios using computer simulation and the driving simulator. Finally, we will use driving simulation experiment results to refine the simulation model and to inform on safety improvement technologies, such as earlier warning or automated braking.

This project will leverage the CrIS UTC team’s significant experience with vehicle-pedestrian crash scenarios. IUPUI has been developing and evaluating vehicle-pedestrian pre-crash warning and braking systems. A large amount of vehicle pre-crash performance data will be collected using two 2013-model-year vehicles with pre-crash warning and CIB capabilities. The data will include the relative motion history of the vehicle and pedestrians, their motion trajectories and speeds, the time and distance that the vehicle pre-crash system starts warning and braking, and the vehicle and mannequin speeds at crash. Similar work is planned for cyclists in 2014.